Chicago P.D. follows the Chicago Police Department uniformed cops who patrol the beat and go head-to-head with the city's street crimes and the detectives of the Intelligence Unit that combats the city's major offenses, including organized crime, drug trafficking, and high-profile murders.

A crossover between the two Chicago shows, Chicago Fire then Chicago P.D., aired on April 29 and 30, 2014 depicting an explosion that brings the fire and police departments together.

On March 27, 2013, it was reported that NBC was considering plans for a spin-off of Chicago Fire. Deadline revealed that the proposed spin-off would involve the Chicago Police Department, and would be created and executive produced by Dick Wolf, Derek Haas, Michael Brandt, and Matt Olmstead.

On January 31, 2014, NBC ordered two additional episodes of Chicago P.D., bringing the total number of episodes for the first season to fifteen.

These characters were introduced in the penultimate episodes of Chicago Fire's first season.

Both Eastwood and Raymonde, like Sagemiller, departed the series, after their Chicago Fire debut, and would no longer be a part of the show's main cast.

For Chicago P.D Season 1, the following actors were cast. Jesse Lee Soffer, who already had a recurring role on Chicago Fire as undercover cop Detective Jay Halstead, was added to the main cast in her place. Jason Beghe was cast as Sergeant of the Intelligence Unit Hank Voight. Jon Seda would play the role of Intelligence Unit Detective Antonio Dawson.Patrick Flueger and One Tree Hill star Sophia Bush joined the cast as Officer Adam Ruzek and Detective Erin Lindsay respectively. Marina Squerciati joined the cast in the role of Officer Kim Burgess.Elias Koteas became a member of the main cast and would play Intelligence Unit Detective Alvin Olinsky. Archie Kao was later announced to be playing Sheldon Jin, a tech-expert working with the Intelligence Unit. Stella Maeve was cast in the recurring role of playing Nadia Decotis, a pretty 18-year-old escort who is addicted to heroin and goes through a very difficult withdrawal. Sydney Tamiia Poitier was to guest star in five episodes as a Detective, who will eventually crossover on to the parent series,Chicago Fire.

The series premiere was watched by 8.59 million viewers and achieved a 2.0/6 Adults 18–49 rating with the DVR ratings reaching 11 million. The season concluded on May 21 with 6.27 million, averaging the first season with 8.03 million viewers per episode. 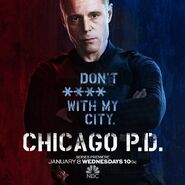 The DVD release of season one was released after the season had completed its original television broadcast. It has been released in Region 1 only, as of September 2, 2014. As well as every episode from the season, the DVD release features bonus material such as audio commentaries on some episodes from the creator and cast, deleted scenes, gag reels and behind-the-scenes featurettes.