Chin Check is the third episode of the first season and the 3rd overall episode of Chicago P.D.

Voight and team head to a house that's been associated with a number of top gangs. Events at the search result in Ruzek being encouraged to seek some counseling which may have lasting repercussions professionally and personally. Halstead's temper rises when he comes in contact with some unwelcome people from his past.

With Diego nearly ready to return to school, Laura requests that Antonio invite his CI, Jasmine, to dinner later in the week. Antonio hesitates, unsure of his wife's intent - is she jealous. Antonio agrees and goes to his meeting Jasmine he invites her to dinner something she accepts.

D'Anthony, the kid Voight saved from Pulpo's men, approaches Voight with a problem - the gang wants him to perform a hit and he doesn't want to do it. Serious about protecting the boy, Voight drops in on D'Anthony's gang leader and cousin, Trayzell, and requests he relieve D'Anthony of his duty. Trayzell refuses and instead demands Voight hand over ten grand for rights to walk away with the kid. This rubs Voight the wrong way, but he somehow keeps his cool.

It doesn't last long, though, once Voight hears his son, Justin, is to be released from jail. Lindsay appears more excited than Voight and she sets up a dinner - a dinner Voight blows off at the last second. Frustrated but still excited to see Justin, Lindsay picks him up outside the prison. Turns out Justin's unfazed by his dad's absence - he wanted to see Lindsay anyway. In fact, he kisses her on the mouth - and she shoves him back. Her repulsion slides off him; he promises to prove his worth to her.

Out in the field, the routine surveillance of a suspect's apartment leads to a surprise murder at the doorstep - and Ruzek's first on-duty shooting. More pressing is what they find in the apartment - specialized ammunition constructed to kill cops, all hidden in insulin boxes. With a little recon, they discover regular shipments of insulin in and out of Chicago from a Canadian distributor, and with some follow-up, Kim Burgess and Atwater locate the salesman... dead in his car. Halstead and Lindsay question his widow, Clare, who contends her husband never hurt a soul. As usual, Voight plays up his secret contacts and hits up Maurice at his hangout under the elevated tracks. Maurice turns up dry, but asks Voight for a favor: he's taking heat from a city attorney intent on building a case. He hands Voight five grand and promises more for names. Voight takes the money in a silent agreement...

Back at the station, Ruzek struggles to follow post-shooting protocol, grumbling through his session with a counselor who insists he take time off. Later, at his engagement party with his fiancée, Wendy, Ruzek finally tells her the truth about working in Intelligence - and that he received word the man he shot died. His relaxed demeanor reeks of denial, but he contends he's okay. Wendy, however, senses the opposite.

Meanwhile, another shooting occurs and leaves a trail of dead bodies, each murder using the same cop killer ammo. When the team discovers that phone records conflict with the widow's story, Lindsay hauls Clare back in for questioning. This time Clare folds and admits that she and her husband ran guns for a dealer named Ganz. Intelligence sets up a fake buy to nail the new suspect, with Olinsky posing as the hard-nosed client. Ganz requests that Olinsky accompany him alone; once they reach the destination and Ganz shows off the guns, Olinsky calls in his comrades. Ganz and his goons let bullets fly as the CPD team arrives, inciting a massive shootout that culminates with Ruzek saving Olinsky from Ganz's twitchy trigger finger.

Earlier in the day, Halstead finds time to visit two families. The first is a mom and dad brokenhearted about their son on the anniversary of his death. Halstead offers them sandwiches and condolences. The second family's not so thankful - Halstead sneers outside their home with birthday cake in hand, causing a scene as the father and his oddball son threaten a restraining order. But Halstead doesn't care - it's the principle at stake. The dead child would have been 15 today.

Olinsky joins Voight in an off-the-books interrogation of a shocked Trayzell. Gagged and bound, Trayzell takes a swift beating from Voight and emerges with a new perspective (and maybe a broken jaw) - he will allow D'Anthony to leave the gang. With Trayzell writhing in a warehouse, Voight passes the five grand from Maurice to D'Anthony and his new caretaker - an aunt from Pittsburgh. It's a kind gesture that will help spark a new life for the youngster.

At dinner, Laura and Antonio wait for Jasmine. When Jasmine arrives, friction starts at seeing Laura but Laura surprises them both by offering Jasmine a necklace. She reveals that she only asked Antonio to invite Jasmine, as a way to say thanks for saving Diego's life. Jasmine is taken aback by this but accepts the gratitude and Laura invites her to continue the meal with them something she agrees to.

Later, Voight's IA handler, Gradishar, contacts him and they meet in a public location, same as always. She grills him about Maurice, insisting that Voight take him down. Straight-faced and calm, Voight lies about accepting money from Maurice and gives her a deadline on the criminal's arrest: two weeks. She warns him not to test her.

Unwinding at her apartment, Lindsay gets a knock at her door - it's Kelly Severide from Firehouse 51, emotionally distressed from his half-sister's kidnapping. With no one else to turn to, he cries on her shoulder. 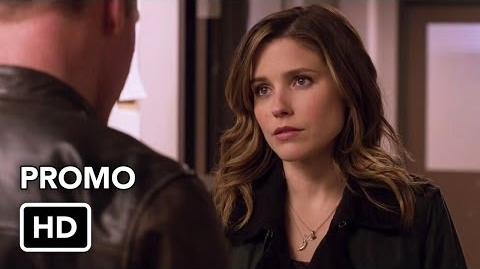