An Honest Woman is the fifth episode of the second season and the 20th overall episode of Chicago P.D.

The Intelligence unit investigates a suspicious case when Voight and his son's pregnant girlfriend Olive are attacked and kidnapped at gunpoint. The gunmen take everything that Voight kept in his secret safe. Meanwhile, Burgess and Roman try to find a person that stole a police badge. Elsewhere, Dawson goes undercover to take down a criminal.

Voight and Olinsky meet with Josie at the bar, dismissing other patrons in the process. Voight asks her about Ian Marks but she tries to ignore them, as Voight uses his bat to break the wooden legs of her chair, knocking her down. Voight stares at the scared woman, stating he doesn't play games. When her protesting boyfriend Carl sees this, Olinsky overpowers and grabs him, slamming him on the bar. Voight threatens to break his fingers with a set of pliers. Josie then tells Carl to give it up, as Voight and Olinksy interrogate Carl as well. Josie reveals she only told them about Voight's house but they don't know where the men went or the name of the other man. Seeing the answers as lacking, Voight breaks one of Carl's fingers and threatens to do it again. Josie then reveals that one man is Ian Marks and his associate is Lukasz Gregorie and describes him. Josie reveals that she does not know where Marks and Gregorie went. Still angry that they caused the robbery of his home, Voight breaks another of Carl's fingers for revenge, to the horror of Josie who quickly helps Carl. Hank and Alvin proceed to leave the scene.

Voight tells the team that he knows the other man's identity but doesn't tell them after Jay asks. Erin tries to speak with him but he casts her aside.

He visits Olive who apologizes for the trouble but he knows it was an error and that her only task is ensuring his grandchild's safety.

Voight returns to his team, who don't have leads on Lukasz and he sets a one hour deadline to learn anything. After he goes to his office, Platt reports that a man has come to see Voight, Erin says it is not the time. However, Trudy says its the other assailant Ian Marks who has arrived to turn himself in, to the squad's shock and Erin reports it. Voight goes down to find Marks who figured he turn himself in and his smug behavior causes Voight to order officers to cuff him. Voight finds his money in the dufflebag and Marks says all his half is there but Gregorie has the rest.

Hank then drags the cuffed Ian away, while the latter tries to protest about this because there are witnesses who all look the other way.

Taking Ian to the Silos, he proceeds to threaten him to find his partner in exchange for living rather than going into witness protection like he hoped. Hank then puts great fear into Ian until he agrees to the deal. Hank also make sure to ask if all of her any rolling it in Marks confirms that she did not.

While in his cell, Ian is made to go and meet Lukasz. Ian remarks that the cops are scarier than the criminals, something to they take on stride.

Ian then meets with Lukasz at the station they start to walk but the latter notices Ian looking at Antonio.

Realizing that he has been played, Lukasz tells Ian to go ahead of him before shooting him in the head and taking his bag. Because of his shots the crowds become a frenzy, Lukasz flees with the officers pursuing him.

Lukasz takes a hostage and threatens to blow her brains out if Hank and his crew do not back off but Erin and Jay sneak up on him and point a gun at his head. Lukasz releases the woman while being cuffed. Hank then proceeds to go through the duffel bags and finds his money but notices something missing. He then throws the man down for answers while the squad look away. After checking his back pockets, Hank finds the blue folder containing the item he was looking for. Grabbing Gregorie, Hank tells everyone that he will take care of him and hauls him off, as they become worried.

Sometime later, Hank has taken Lukasz to the silos with the latter afraid of what Hank will do to him. Hank stares at the city of Chicago, before approaching him while armed with his gun.

Soon Hank comes back into the precinct with an apprehended but bruised and bloodied Lukasz while everyone, including Platt are surprised to see he is spared. Trudy tells the man that he will be transferred to booking but Hank stops the transporting officers to tell the man he will one day believe he is lucky to have survived before lets him get taken away.

Kim and Sean then find the girl who stole Kim’s uniform. She is threatening the bully of her younger sister by pretending to be a cop. After dismissing the bully she apologizes to Kim and Sean for her actions while they warn her on her acts and tell her that she should of gone to them.

Antonio also finds himself being flirted with by Layla, the wife of Asher. He will both services while a jealous Asher comes up to tell him not to touch his wife and get the car.

At home, Hank is in his den talking with Justin who has returned. Justin tells his father that he went to see Olive and she is fine. He also reveals the child is a boy. Hank is pleased and Justin brings up how he knows of the situation apologizing to his father because he let the information slip to Olive but Hank is not phased because the culprits have been dealt with. Hank then gives his son something, with Justin surprised that his father gave him his late mother's ring. 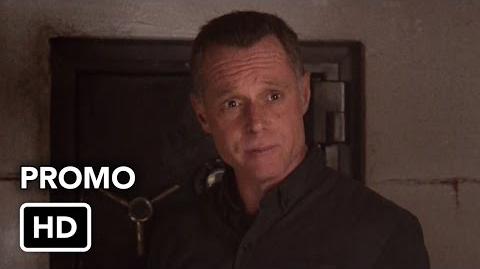