Officer Adam Ruzek is a member of the CPD Intelligence Unit. He is portrayed by Patrick John Flueger.

Adam's parents divorced when he was a child. Bob Ruzek, his father, served with both Sergeant Voight and Detective Olinsky, Adam's former partner. This is most likely the reason that Adam sought to become a police officer. Growing up, Adam was very close to his father who made the time out of his busy job to spend as much time as he could with him.

When he was 18, Adam was engaged to his girlfriend Nicole but broke it off as both felt they were too young. He later attended classes at the police academy. When Intelligence needed an undercover officer, Adam was taken right out of the Academy. Since then, he has remained a member of Intelligence.

Later on, he became engaged in to a woman named Wendy. He did not reveal to her too much about what goes on at work to protect her. They were shown to have a close and playful relationship, sending racy photos of each other back and forth.

While Adam is very eager to please, he sometimes makes impulsive decisions (such as accepting a call from his fiancé during a stakeout). This creates friction between himself and Olinsky.

Adam and a patrol woman Kim Burgess had a close working friendship, frequently spending time bantering at work. He even helps Burgess get revenge on Platt, a desk Sergeant who treats Burgess and Atwater (before he became a part of Intelligence),as well as most other officers horribly. After a particularily stressful call, Adam and Kim shared a kiss. Kim regretted this almost instantly as Adam was engaged.

During a shootout with Jacob Sims, Adam is shot in the chest. The injury is not severe as his Kevlar vest deflected most of the shot.

Towards the end of Season one, he broke up with Wendy becoming involved in a secret romantic relationship with Officer Kim Burgess.

Burgess and Ruzek's relationship grows. When she is shot, it brings it home to Ruzek how he feels about her. They admit they love each other and their relationship becomes known to colleagues so they don't need to hide it anymore.

In the finale, Ruzek proposes to Burgess in the locker room, as he wanted to keep it informal. She accepts his proposal and they share a passionate kiss.

It was revealed that Ruzek still loves Kim and wants nothing more than to resume his relationship with her. And occasionally makes out with her

Ruzek returns from an undercover job, hoping his job with Intelligence is still open. When he was gone, however, his spot was taken by former Narcotics detective Kenny Rixton. Ruzek then talks to Voight about his old spot in Intelligence and if he can get it back. Voight can't give Ruzek his old spot so he had to work in Uniform.

In Favor, Affection, Malice or Ill-Will Ruzek is cleaning his locker when Rixton tells him that he was good friends with his father. He also reveals he has accepted a job offer to be the second hand of a narcotics team, to which Ruzek then returns to Intelligence.

He doesn't get back together with Kim until Season 5, and their relationship blossoms once again in Confidential when they kiss at Molly's. It is unknown when they end it thereafter.

In Descent, Adam partakes in the rescue of saving Antonio’s daughter. He is shocked to learn that Antonio has a painkiller addiction which resulted in the kidnapper. Adam and Voight find the kidnapper, before Antonio appears to violently beat up and pushes the criminal out of a window, instantly killing him.

From Bad Boys to Sacrifice, he dated fellow detective Hailey Upton. They both agreed they were better off as friends, it is implied that he still loves Kim Burgess.

In Reckoning, Adam is arrested for his part in trying to bring down Brian Kelton. He tells his squad that he’d rather not see them as he is being taken into custody by IAD.

The episode Doubt shows Ruzek has been stripped of his police powers and he is awaiting trial, due to taking the fall for something Antonio did. However, in Assets, Ruzek's case was dismissed by a favor pulled by Voight, which grants Ruzek his position in Intelligence once again, whilst fortifying his loyalty to the latter.

During No Regrets, Ruzek learns that he got ex-fiancé Kim Burgess pregnant with his child. As a result of the news, he is shocked and asks her what she intends to do. After the case with a rescue missing woman who was held captive for years, Kim informs Adam that she has decided to give birth and he tells her that he will support her. However, the baby was lost in a miscarriage. 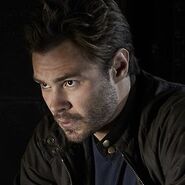